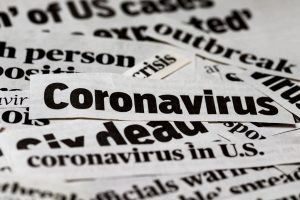 A weekly intelligence brief distributed in February showed white supremacist organizations have discussed plans to weaponize coronavirus through saliva and other methods.

According to BET, federal investigators appeared to be monitoring white nationalists’ communications on Telegram, an encrypted messaging app that has become popular with neo-Nazis. The conversations pointed to white supremacists targeting law enforcement and “nonwhite” people with attacks designed to infect them with the coronavirus.

“Violent extremists continue to make bioterrorism a popular topic among themselves,” the intelligence brief written by the Federal Protective Service stated. “White Racially Motivated Violent Extremists have recently commented on the coronavirus stating that it is an ‘OBLIGATION’ to spread it should any of them contract the virus.”

An intelligence briefing marked for official use only, noted white supremacists have “suggested targeting … law enforcement and minority communities, with some mention of public places in general.”

According to the document, the extremists discussed a number of methods for coronavirus attacks. They included spending time in public with perceived enemies, leaving “saliva on door handles” at local FBI offices and spreading coronavirus germs in “nonwhite neighborhoods.”

The briefing also showed that white supremacist organizations were taking the threat of coronavirus seriously when some in government were downplaying the threat as a hoax.

“There is a big concern right now — including from people who work in counterterrorism — that it’s an opportune time for these accelerationist groups to strike,” said Nick Martin, the editor of the Informant, a newsletter focused on hate and extremist groups told Yahoo News.

Martin added a growing number of white supremacists have also expressed interest in “accelerationism,” which involves advocating for extremist attacks with the express goal of provoking a larger societal conflict.

Last year, there was a significant rise in the number of fake profiles on social media acting as African Americans in a disinformation effort to prop up Donald Trump’s reelection campaign. The coronavirus outbreak has already affected minorities as jobs and hours are being cut in response to the virus.

No images available at the moment

Follow Me!
Republicans Are Pushing for $1,200 Coronavirus Checks. Do You Qualify? Big Ten Announces It Will Begin College Football Season After All
Scroll to top