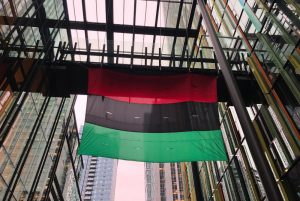 A 40-foot Pan-African Flag was raised last week on Amazon’s headquarters in downtown Seattle as a symbol of the tech giant’s commitment to diversity.

The Black Employee Network (BEN), one of Amazon’s 10 employee affinity groups, organized the flag display and a corresponding event on Feb. 13 as part of Amazon’s Black History Month programming. In addition to commemorating the 150th anniversary of the 15th amendment, which granted African Americans the right to vote, the event was held to shine a light on black Amazon workers.

“For black and African members of the Amazon community, we hope that this flag tells you that we see you, that we value you and that we’re in it with you as we make progress together,” said Ian Wilson, the vice president of Human Resources at Amazon Web Services, reports The Seattle Times.

“And for other Amazonians, we hope that this flag is a reminder to learn and be curious about black history,” Wilson added. “Black history is too often smoothed over in U.S. history books and in U.S. education, and it’s critical to acknowledge more historic perspectives and the role that black leaders have played in the development of our country and our culture and our companies.” 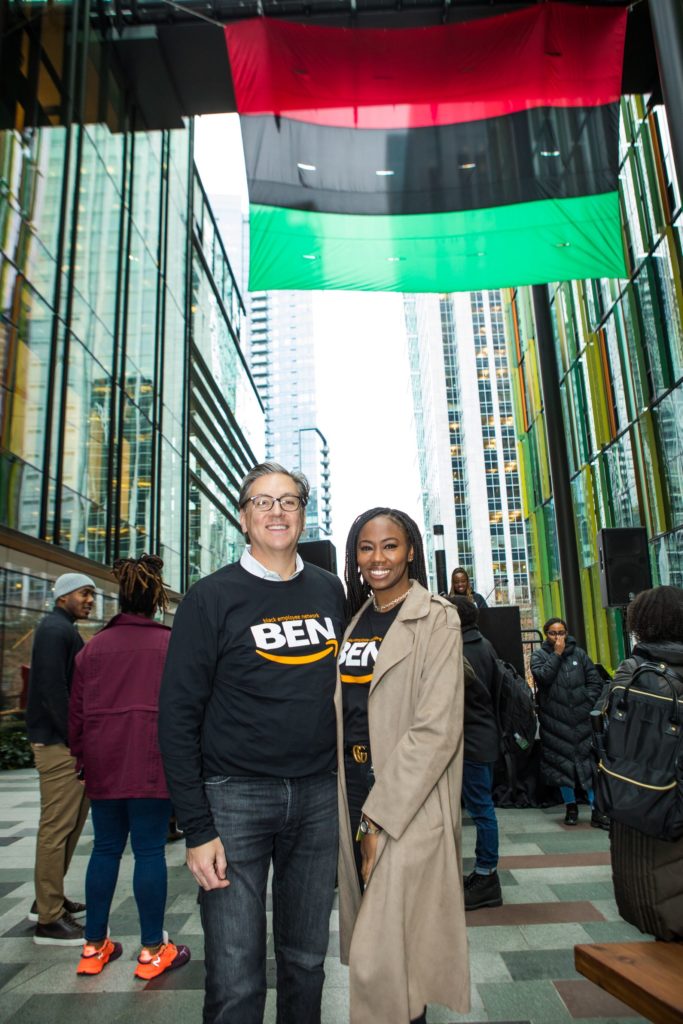 The Pan-African flag was designed in 1920 by activist and black nationalist leader Marcus Garvey to represent people of the African Diaspora in response to the infamous 1900 song “Every Race Has a Flag but the Coon.”

“Show me the race or the nation without a flag, and I will show you a race of people without any pride. Aye! In song and mimicry they have said, ‘Every race has a flag but the coon.’ How true! Aye! But that was said of us four years ago. They can’t say it now,” Garvey was quoted saying in 1921 in the Negro World weekly newspaper.

Each color in the tri-colored flag has a symbolic meaning: red represents the blood that unites all people of black African ancestry and was shed for liberation; black symbolizes black people; and green stands for the abundant natural wealth of Africa.

“Black History Month is a very important element of our understanding of American history, and something that we need to find a way to better incorporate into the way we talk about our country’s history,” said Andy Jassy, the CEO of Amazon Web Services and BEN Executive Sponsor, in a statement sent to BLACK ENTERPRISE. “I see the opportunity here at Amazon for sharing stories, celebrating, and promoting the accomplishments of black people throughout our great history.”

Although Amazon has flown the rainbow Pride flag from its headquarters during Pride Month since 2016 and long celebrated Black History Month, this is the first time the company has flown the Pan-African flag. Nevertheless, Amazon executives acknowledge that the company needs to do more on diversity and inclusion, reports The Seattle Times. According to Amazon’s most recent disclosures, 24.5% of its U.S. employees identified as black from the end of 2018, but only 7.2% of black employees are managers. This is an increase from 2014 when white Amazon employees constituted 71% of all managerial roles, while black and Hispanic employees were only 4%.